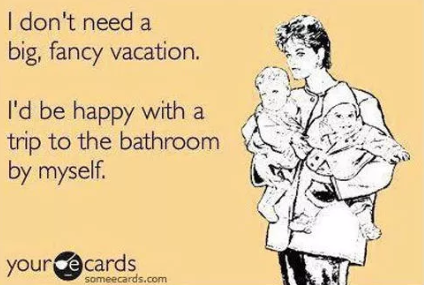 It’s 5:30 am.  The sound of my soft, gentle alarm going off is intermingled with the screams of my almost 4 year old daughter who is telling me she already pooped herself (she’s sick) and would like to finish her BM in the toilet, which, of course, she doesn’t want to do without my assistance.  Her demands get louder and angrier as I quickly try to shuffle out of bed and into clothing and by the time I get upstairs a few minutes later, she’s already woken my 6-year-old son, who is not too happy about starting his day this way either. Everyone is miserable and doing some form of whining or yelling and I’m still trying to wipe the sleep out of my eyes to appropriately deal with the situation.  But all I’m actually thinking about is what I am supposed to be doing right now…

Rewind to three weeks ago.  I’m having a rare moment of being comfy and alone in my house, focusing on me (mamas you feel me??) looking at a planner I just ordered to make this my Best Year Ever.  I’m actually taking some time to think about what I want.  What would make ME happy? (For the mothers out there, I don’t have to explain how epic this is, right?)  It was rare and GLORIOUS. And one of the things that I decided would make me happier would be to get up early, like 5:30 am early, in order to have some solitude and peace before the chaos of getting the kids ready for school begins.

I imagine waking up slowly…getting myself ready and then meandering to the kitchen where freshly brewed coffee and a glass of cold water are waiting for me.  After that, I’ll meditate for a bit and then I’ll reflect on the day that lies ahead. What are my goals? What’s really meaningful to me today? Where do I want to spend my energy….

Right.  Facepalm.  And that’s the difference between the life that I fantasize about as a small business owner and a married mother of two small children and my ACTUAL life.  Sigh.

But that’s the thing about motherhood, isn’t it?  It requires ALL of us, more than we knew we would ever have to give – more than we thought we could ever possibly give – but that doesn’t change the fact that we are still adult human beings with dreams and goals and needs and wants that have nothing to do with our children.  How do we marry the two?? This quickly becomes a real problem…a real problem that can quickly and easily turn into martyrdom.

All the Moms out there have experienced this, but let’s actually define it so we have an intellectual understanding of what we’re dealing with.  According to Webster’s Dictionary, martyrdom is “the suffering of death on account of adherence to a cause and especially to one’s religious faith” and a martyr as “a person who sacrifices something of great value and especially life itself for the sake of principle” or a “victim, especially a great or constant sufferer.”

Sounds ugly, doesn’t it?  Who on earth wants to identify as that??  Let’s think about motherhood for a second though and how it relates.

How many Mamas out there have missed an event you really wanted to attend because your kid needed you for some reason?

How many Mamas out there have taken care of your kid even when you have been physically ill, depressed, going through a divorce or fighting with someone you love?

How many Mamas out there found a way to pump at work because you felt strongly about your baby getting breast milk even though it was/is a battle and a TOTAL PAIN IN THE ASS?

How many Mamas out there have missed out on countless hours of sleep because your baby needed to be fed, or changed, or just held, or your kid was sick, or was having a nightmare, or….or….or…..despite being totally exhausted yourself?

There is no avoiding martyrdom in motherhood.  It’s just part of the deal.  And even though many of us signed up for this (having no idea what we were getting into of course ;)) – even worked very hard for it – it doesn’t change the fact that the moments that we really need to be taking care of ourselves are often squashed as a result of our children’s needs.  That is the simple and brutal truth of motherhood.

And why do I keep saying Mamas and Motherhood instead of Daddies of Fatherhood?  Because the simple, but ugly truth here is that it’s just different. No one asks Dad how they “balance” (UGH) both raising children and work.  Because even in 2019, the burden of child raising still falls to Moms.  In fact, Moms are spending more than double the number of hours child rearing today that they were in 1975 when Moms were typically working way less.  And yes, Dads have stepped up, no doubt. Even in my own life and this particular story, it’s not like my husband was being a sleeping, lazy POS during Poop Gate.  We rotate who takes care of B every morning and this lovely morning happened to be on me. Yes, Fathers are doing more at home than ever before…but generally speaking, the invisible burden still mostly falls on Moms.  Period.

Now let’s make this more complicated: Motherhood turns us into Martyrs, which is something that will always be different for us than it is for Fathers.  Now, what if you were already prone to martyrdom PRE-children? I know that’s not fun to think about, but if we’re honest with ourselves that is very likely the case because we’re women.  Hear me out. Good ‘ol gender roles are woven into every fabric of our society and they make a pretty compelling tapestry of expectations for women.

Don’t be so sensitive.

He’s making fun of you because he likes you, that’s all, honey.

From the time we are little, we are being groomed to PUT OTHERS NEEDS IN FRONT OF OUR OWN.  Whether we received those messages at home, at school, from others or some combination thereof, those messages have been there from the beginning and they constantly and relentlessly work their way into our minds and our hearts without our awareness or consent. (Sound like anything else you’re familiar with??).

So if we’re being really honest with ourselves, my fellow females, it is very likely that we came into adulthood with some martyrdom tendencies.  Perhaps we’re aware of it and working on it – rock on with your bad self lady! Perhaps we’re aware of it but feel paralyzed to change this deeply ingrained pattern that we’ve been playing out for decades – I feel you.  Or perhaps we haven’t really stopped to think about this at all until now – been there, sister. So we have all of this already going on…and then we went and had children. And now we feel like our lives have become completely about making everyone around us happy – our children, our partners, our bosses, our employees, our friends, our parents, our siblings – and we have completely forgotten about ourselves.  Fuck.

Now that we’re all depressed thinking about this dark reality, what do we do with it??  There has to be a better way right? Yes and no, honestly. In order for this to be truly different, a million things need to change in our society.  So we’re working on that… (#metoo, #timesup, etc) 😉 But until then, how do we do better with all of this martyr stuff?

Two things: 1) Boundaries and 2) Acceptance.  These things will be Part II 🙂

Flashback to 5:30 am this morning.  I sit with B as she finishes her poop.  Wipe the rank diarrhea off her butt. Console my oldest (or myself??) about how B has a bit of a tummy bug and will be better soon.  Set them both up with books to keep them occupied. Stagger down the stairs for the coffee that didn’t brew overnight as planned, chug some water and rush to get some meditation in (oh, the irony) because Poop Gate consumed 30 of my 45 minute morning ritual.  I put on my headphones and exhale, feeling the desperation for meditation more than ever…

…and then tiny little footsteps creep next to the couch and a tiny little body slowly and carefully winds herself around my leg.  She looks up at me with the sweetest little smile, squeezes as hard as she can and says “Mommy I love you sooooo much”. My heart explodes as simultaneously exhausted AND grateful tears roll down my face.  I smile at the miraculous insanity and mundaneness of it all and, somehow, I find the energy to give more.

Dr. Colleen Cira is a Licensed Clinical Psychologist, the Founder and Executive Director of Cira Center for Behavioral Health, a trauma and anxiety expert, clinical supervisor, writer, speaker, advocate, wife, and Mommy of two little ones.  To schedule an appointment with someone on her team, please visit ciracenter.org