The Two Things You Need To Do To Survive Overwhelming Moments 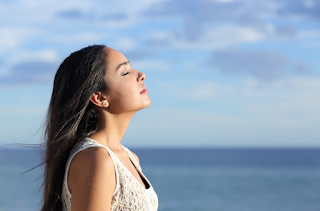 I sit here typing with my newborn sleeping in her Moby strapped to my chest and my toddler playing happily next to me at our kitchen table with his cloud dough and monster trucks.  It’s quiet (with the exception of some Uptown Funk – who wants to listen to Sesame Street songs all day??) and everyone is content.  I feel like a Pinterest pin.  It’s lovely.  Big sigh.  However, if we were to rewind and take a peek at the Friday 4 weeks ago, you would’ve seen a totally different picture.  My brand new baby would’ve been crying from her bouncer while my toddler’s face turned purple screaming at me while I scrambled to meet everyone’s needs and would fail over and over again at this unattainable goal.  To say that I was super overwhelmed is putting it mildly.  That was only a couple months ago.  The difference between now and then is STAGGERING.  And it made me think about how quickly we turn a problem into something bigger because of what we stack on top of it.

We all have real problems – problems that anyone would struggle with in the same situation – but often it’s what we do with those problems that either makes the problems seem bigger or smaller.  The last few weeks have been hell for me – the learning curve of parenting two, especially a 3 year old and a newborn, has been steep.  But I think it would’ve been less painful if I hadn’t thrown a bunch of my own stuff on top of it.  When #1 (L) was having a really epic tantrum, instead of just giving him and myself a break, recognizing this is just part of the process of adding another human to our family, I automatically started to worry that I wasn’t handling his anger well.  Or that something was wrong with him because of how intense his anger was.  When #2 (B) would go through this insane cycle of nurse, throw up, nurse, throw up, I would worry that it would always be like this, rather than a small chapter in her very little life.

Of course I logically knew that L was just adjusting and B was simply a brand new baby and they do weird things, but emotionally it felt like it was going to be like this FOREVER.  And from that emotional place, I felt like screaming, “I can’t do this!!”, “What is wrong with me?”, “What is wrong with THEM??”, “I’m a failure!”.  You get the idea.  I took this totally normal, albeit difficult, problem (the adjustment of one child to two) and turned it into 1) a character flaw in myself; 2) something permanent.

But we all do this to some extent.  We get into a fight with our husband and go to a dark place of either “I’m so f*cked up” OR “Why did I marry him?”.  We screw up at our jobs and spend the rest of the worrying that we’ll get fired.  We get a letter from our child’s teacher saying that s/he did something bad at school and we automatically start to worry that we’re terrible parents or that our child will have problems for the rest of his/her life.  Right??  We don’t always do this and certain things trigger us more than others, but this cycle happens to the best of us at one time or another.  We take a totally normal, but difficult problem and make it more difficult for ourselves with shame, blame and judgment.

So how do we get out of this cycle?  Well let’s be honest…to some extent, we don’t :/  We’re human and when difficult things happen, sometimes we’re not going to deal with it exactly the way we would like.  So that’s step 1: Let yourself off the hook.  Freak out a little.  Cry until you run out of tears.  Lose your temper.  Is this ideal?  Of course not…but it’s human.  And you’re human.  So if you spend all of your time trying to suppress your feelings and/or beating yourself up for having undesirable feelings/thoughts/reactions, you’re just going to make the problem worse.  So let it happen (because it’s probably going to anyway!) and give yourself grace.  There ya have it.  Step 2: Just. Breathe.  When things feel overwhelming and intolerable, when you feel like a messed up idiot, when you wonder if things will ever get better…just breathe.  Just get through that moment.  Don’t worry about the next hour, let alone the next day.  Just breathe and focus on whats directly in front of you.  Because it will get better…you just have to breathe and wait patiently for that to happen.

PS – I wrote this post a couple of weeks ago and am just getting around to finishing it and posting now.  So rest assured…even when it’s easier, it’s still crazy 😉

How about you?  What do you do when you’re feeling really overwhelmed?